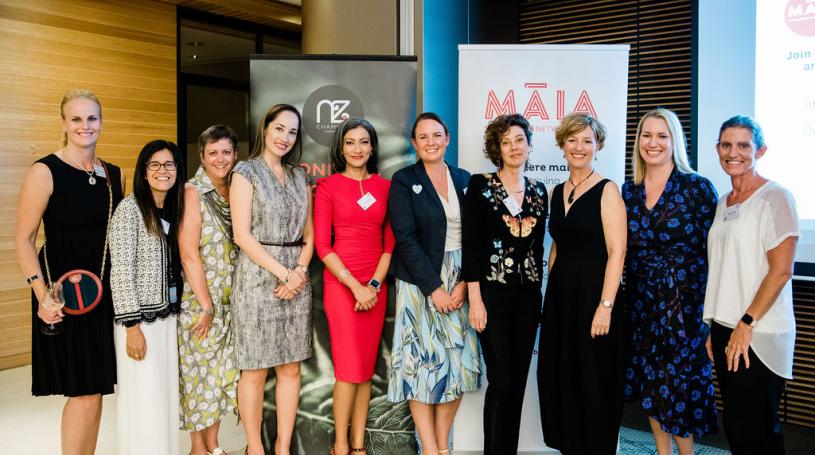 On 6 March, the NZ Chamber officially launched Māia, the network for NZ women in Asia aiming to bring together like-minded professionals.

The network has four key pillars of focus:

Haere mai | Network and support for those coming to Asia

The event was opened with a welcome address from Her Excellency, Jo Tyndall, New Zealand High Commissioner.  Having only just been appointed to the role, it was exciting that she could make the launch of the Māia network one of her first engagements in Singapore.  Jo shared some of her personal experiences of the balance (or lack of) of women in leadership roles within the diplomatic context.

Māia, meaning to be brave, bold, capable and confident is the name gifted to the network by Wayne Mulligan, CEO Fomana Capital.  In his mihi, Wayne described Māia as being a gift to all the women of the world saying “Māia is not a name, Māia is a movement”.

The panel discussion started with Ms. Sharanjit Leyl highlighting that at the current rate it will take 270 years to close the gender gap in political and economic spheres.  Her first question to the speakers was to ask what their companies were doing to promote change and advance women.  Responses ranged from increasing workplace flexibility and having a female CEO to prioritising diversity and inclusion through telling people it’s ok to be who you are.  Abbott, the global  healthcare company, has created an internal women’s leadership network for connection and support; Phillips has a goal for women to make up 25% of Executives by 2025; Fomana Capital is designing businesses to have women in leadership roles right from the start; and, BP focusses on attracting diverse talent within its recruitment marketing and have a “rules of the road” ensuring qualified women are on interview panels and candidate slates.  Fonterra has developed a global programme that provides women the opportunity to work on projects, learn new skills and take on additional responsibilities, increasing their confidence and encouraging participation.

With these initiatives in place, the panel was asked what changes were identified as a result.  While acknowledging that in the workplace resistance can be encountered, the panellists spoke about how obstacles were overcome with many companies seeing changes in culture, an increased confidence in women with a more engaged and diverse workforce who had provided positive feedback on many initiatives.

However, all acknowledged that we are still a long way from reaching the goal post of equity in employment. Strengthening social inclusion policies, ensuring women sit at the tables where decisions are made, mentoring and providing inspiration as well as building a network of male champions were all highlighted as opportunities that each speaker was personally committed to.

Closing the gender gap is not only socially and ethically the right thing to do, it was noted by the panel that it will have significant economic benefit for communities.  Ms. Leyl closed the discussion by citing evidence from a recent McKinsey report that highlighted Asian economies could add an extra $4.5 trillion dollars to their GDP by 2025 if they did more to advance women.